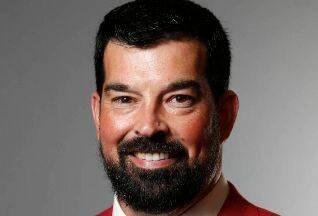 COLUMBUS – Ryan Day thinks Jaxon Smith-Njigba and Julian Fleming could play against Toledo on Saturday night but he stopped short of guaranteeing a return by Ohio State’s two injured wide receivers at his weekly press conference on Tuesday.

Smith-Njigba, who set OSU records with 95 catches for 1,606 yards last season, caught two passes for three yards before leaving the season opener against Notre Dame. He did not play last Saturday against Arkansas State. Fleming, who has battled injuries often in his college career, did not play in either of the first two games.

Talking about Smith-Njigba, Day said, “He’s further along than he was at this point last week. We’re going to expect him to play this week. We’ll see how this week goes. We’re only going to put him in the game if we feel 100 percent sure that he’s ready to roll. But we’re expecting him to play.”

The Ohio State football coach said Fleming could be ready to go by Saturday, too.

In the absence of Smith-Njigba and Fleming, first-year starters Emeka Egbuka (13 catches, 208 yards, 2 touchdowns) and Marvin Harrison Jr. (12 catches, 240 yards, 3 touchdowns) have stepped up in a big way.

Egbuka and Harrison have been exceptional but Day said losing two of the Buckeyes’ top four receivers before or during the Notre Dame game created some momentary anxiety.

“I think we were good going into Wednesday and then by the time we were in the second quarter we were down two of those guys,” he said. “There was a little bit of a panic there.

“We’re a different team when Jaxon is in there. There is no question. We had to have some other guys step up and figure things out. We can’t wait to get Jaxon back but it has allowed us to get some other guys out there and kind of build some packages.

“To get those guys (Smith-Njigba and Fleming) back is going to be critical. We’re going to parcel out the reps (repetitions) the best we can. Those guys are all going to play because they need to,” Day said.

• Too many penalties: Ohio State had 9 penalties for 85 yards in a 45-12 win over Arkansas State last Saturday.

“That’s ridiculous. We’ve got to get that fixed,” Day said. “They’re being addressed. We have our ways of doing that. It’s not going to be accepted going forward. You have to play with emotion and not let emotion play with you.”

• Freshman defensive linemen: Freshman defensive tackle Mike Hall has been impressive in OSU’s first two games with two sacks and five tackles for losses. Another freshman, defensive end Caden Curry, stood out against Arkansas State with four tackles and a tackle for a loss.

Hall stood out from the start of preseason practice, Day said.

“In the preseason you could see what he was doing. He’s very disruptive. But you really have to earn your way here. You don’t just get thrown into it when you have some guys who have been here for a little longer. You have to earn your time. But at the end of the day the best players play. He has been very productive,” he said.

Curry also was noticed early in the preseason. “The more he plays, the more he’s probably going to find a role for himself. He’s very, very productive. He has been productive since he got here,” Day said.

“Throughout the whole recruiting process Dallas and his family were excellent. Same thing when he was here. It’s great to see him playing. Certainly wish he was playing for us,” Day said. “He’s from a great family and a great (high school) program. I guess this is the real positive side of the transfer portal, the opportunity for someone to play. I’m glad he’s doing well.”

• Stover a target: Ohio State has not been known for throwing to its tight ends but Stover has shown he can catch the ball.

“We know with our receivers we’re going to get him in a lot of one-on-one situations. He is another weapon for us. It is good to see him get some catches and hopefully build on that,” Day said.