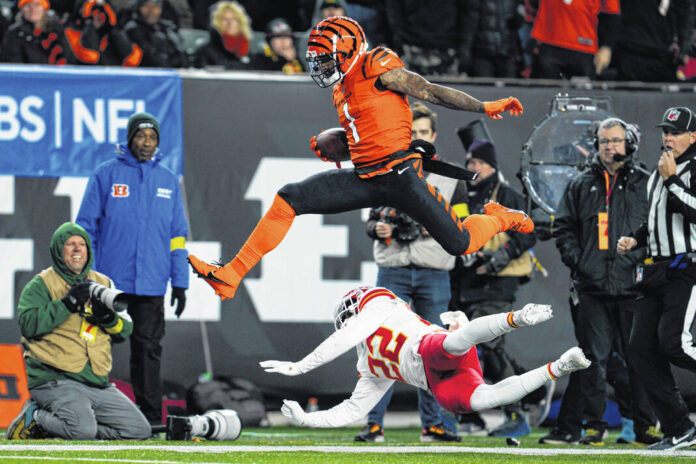 CINCINNATI (AP) — The Cincinnati Bengals showed they are a team to be reckoned with in the AFC.

They’ve certainly got one of the NFL’s hottest and most confident quarterbacks right now.

Joe Burrow helped the Bengals (8-4) win another gritty one, engineering a fourth-quarter drive in a come-from-behind 27-24 victory over Patrick Mahomes and the Kansas City Chiefs.

With a three-point lead late in the game, Burrow kept throwing to move the chains on the final drive of the game to run out the clock.

“He’s playing at the level we need for him to lead us to be confident that we can go win every game we play,” Bengals coach Zac Taylor said.

It was the third time in 11 months that Burrow outdueled Mahomes. The Bengals beat Kansas City by field goal on Jan. 2 to clinch the AFC North title last season, then a month later prevailed 27-24 in overtime in the AFC championship game.

Cincinnati has won four in a row and remained tied with Baltimore for the lead in the division after the Ravens managed to escape with a 10-9 win over Denver after quarterback Lamar Jackson left the game with a knee injury. The Bengals wrap up the regular season by hosting the Ravens on Jan. 8.

The Bengals are playing with confidence at the moment.

“We set it in stone last year,” receiver Tyler Boyd said. “We always find the big plays at the end of the game and find a way to secure the win. This year is nothing new. Nothing we stress about. It’s natural. We think we’ve got the best offense and the best defense. We believe.”

The unflappable Burrow continues to make things happen when they need to happen. Cincinnati went 3-0 in November with Burrow throwing for 831 yards and six touchdowns against just two interceptions. Against the Chiefs, the third-year quarterback threw for 286 yards and two touchdowns and ran for another score. One of the gutsiest plays was a 14-yard throw over the middle to Tee Higgins on third down with 1:59 left. Backup running back Samaje Perine, pushed into a starting role with Joe Mixon recovering from a concussion, rushed for a season high 106 yards. LB Germaine Pratt stripped Kansas City TE Travis Kelce after a long gainer and then recovered the fumble. That set up Cincinnati’s game-winning fourth-quarter drive.

While the Chiefs converted their two fourth down attempts in the game, the Bengals only try on fourth down fell flat. Just before halftime, the Bengals were stalled on fourth-and-1 on the Chiefs 4. Cincinnati tried drawing the Chiefs offside before calling a timeout with 51 seconds left. Instead of a field-goal attempt, the offense came back and tried a jet sweep to Trent Taylor, who was pulled down in the backfield for a loss of 3 yards. … Entering the game, Cincinnati was tied for second in the NFL in red zone scoring (71.43%). Against Kansas City, it was just 3 for 7 (43%) inside the 20.

WR Ja’Marr Chase had a loud return after missing four games with a hairline fracture of his hip. The reigning AP Offensive Rookie of the Year had seven catches for 97 yards, including two grabs that kept the Bengals’ final drive going so they could run out the clock.

WR Tyler Boyd dropped a perfectly lofted 18-yard pass in the end zone in the third quarter. The Bengals had to settle for a 36-yard Evan McPherson field goal that tied the score at 17.

Boyd did, however, have four catches for 60 yards.

TE Hayden Hurst, a key target for Burrow this season, suffered a right calf injury in the first half and didn’t return.

25 — touchdown passes this season by Burrow, tied for second in the league with Josh Allen. Mahomes is the leader with 30.

Cincinnati gets a chance on Sunday to avenge the embarrassing 32-13 loss to the Browns on Halloween. The Browns (5-7) will be led by Deshaun Watson, who last Sunday came off an 11-game suspension after accusations by more than two dozen women of sexual harassment and assault during massage sessions. He wasn’t much of a factor in the game, but the Browns got two defensive touchdowns on the way to topping the Houston Texans 27-14.