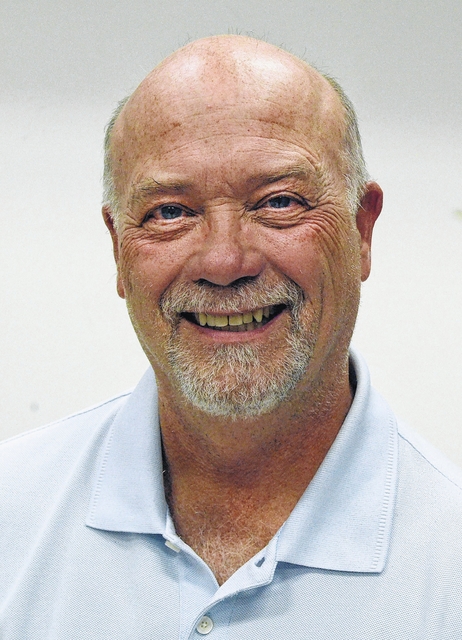 In the 1935 Broadway musical “Dumbo,” Jimmy Durante was leading an elephant across the stage when stopped by a policeman. Asked what he was doing with the elephant, Durante replied, “What elephant?” As time evolved since that early refusal to acknowledge something as obvious as an elephant on a stage, the expression “the elephant in the room” has come to mean that obvious something that someone refuses to see.

I thought about that expression quite a bit after learning of William White’s passing. William, along with Gary Moeller and Jim Lynch, was the third of this city’s three losses this past July when the 1984 Lima Senior graduate lost his battle with amyotrophic lateral sclerosis on July 28.

The time I spent on a cold January night in 2019 with William came about when my friend and former teaching and coaching colleague at Perry High School, John Bean, asked me to write something for the newspaper on a program in the Lima Senior High gym for Bean’s nonprofit called Commitment to Kids.

William was one of three speakers lined up to address a whole bleacher full of young people with the other two being former Ohio State football standout and Piqua native Matt Finkes and Ohio State head wrestling coach Tom Ryan. The program was entitled “Becoming a Character Champion for Life.”

The evening began with a meet-and-greet downtown at The Met, giving me the chance to meet and speak one on one with all three presenters. And, while I enjoyed my time with both Finkes and Ryan, I really enjoyed my conversation with William. I remember his obvious pride when he spoke of his son Brendon, who followed his father’s footsteps onto the turf of Ohio Stadium to play for the Buckeyes and who’d just been named the defensive player of the game in that season’s Rose Bowl.

Following our conversation that covered some of William’s memories growing up in the Lima City Schools, of his four years starting for the Buckeyes and of his eleven years in the NFL playing for the Lions, Chiefs and Falcons, the latter team, a Super Bowl participant in his final season, it was time to make our way to Lima Senior for the evening’s program.

Before a mostly filled east-side bleacher in a different Lima Senior gym than the one in which William played a key role his senior year in one of the most memorable Spartan basketball games ever played, a 70-68 win over a Middletown team that featured future pro-football hall of famer Cris Carter, when it came his time to speak, simply put, William captivated his audience.

It mattered little that those young people weren’t even alive in 1984 to see William gain well over a thousand yards as a Spartan running back and play so well in the Spartan secondary that he would accept a Buckeye scholarship nor were they alive to see the Ohio State version of William nor the NFL version of William.

As a matter of fact, on that evening, William barely mentioned football. Instead, he talked about growing up in a challenging area of Lima off Reese Avenue not far from Whittier School and told his young audience never to allow an environment either to define them or limit their choices or desires to aspire to greatness. He told them of his indifference to academic matters when he was younger and spoke of the moment when what he called his adrenalin light snapped on and his classroom performance improved, so much so, he earned a degree from Ohio State in metallurgical engineering.

Still at that time in possession of a relatively steady gait, William walked back and forth on that gym floor so as to engage fully every section of the bleachers, and as he walked he said, “See what I’m doing? These are my footsteps, not yours. Now, your role in life is to create your own footsteps, not follow in mine or anyone else’s.”

When William wrapped up his speech and handed the microphone off to Buckeye head wrestling coach Tom Ryan, it was apparent by the loud cracking sound of hundreds of hands colliding and the looks on those teen faces I saw that evening that what he had to say resonated.

When I learned of William’s passing, I thought of that cold January night in 2019 and the time I spent with William. As I replayed that evening in my head, from the meet-and-greet at The Met and on to Lima Senior’s gym, I remembered both William White’s commission and also his omission.

As for the commission, he returned to Lima as he did many times to give back to a city that he felt gave him so very much. And, as for omission, well, in all the time I spoke with him one-on-one that evening and during his speech as he walked back and forth with mike in hand in front of those bleachers of young people, NOT ONE TIME did he mention the elephant that was in every room in which he found himself for the last six years of his life.

And to me, that is a large part of what made William White remarkable.