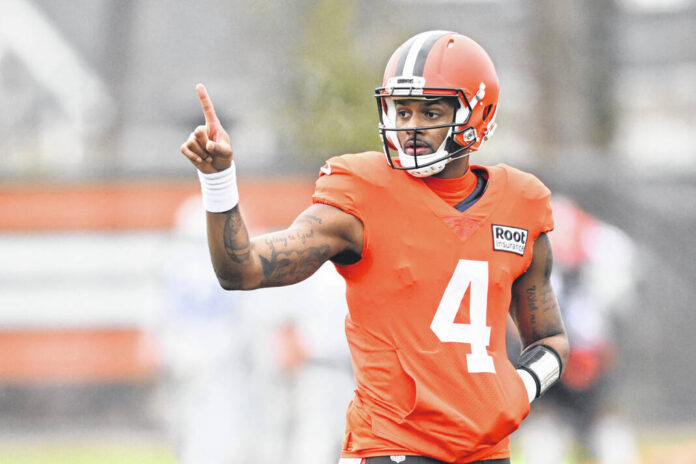 Cleveland’s starting quarterback didn’t address the media Wednesday before practicing for the first time since being reinstated by the NFL from his 11-game suspension for alleged sexual misconduct.

Watson has been accused of harassment and assault by more than two dozen women during massage therapy sessions while he played for Houston. On Sunday, Watson will make his debut for the Browns against the Texans, the team that drafted him in 2017 and traded him to Cleveland in March.

In August, the 27-year-old Watson accepted the league suspension, a $5 million fine and agreed to undergo therapy and counseling. He returned to the Browns last month and has been practicing for the past two weeks.

Typically, Cleveland’s starting quarterback speaks on Wednesday before Sunday games. That’s been the case with Jacoby Brissett all season.

However, Watson didn’t address reporters from the portable podium. He spent some time sitting in his chair wearing headphones and checking his phone during the 45 minutes the locker room was open.

The Browns did not provide any reason for Watson not speaking for the first time since his suspension was announced on Aug. 18.

The last time he conducted an interview, Watson continued to insist he had done nothing wrong.

He has settled 23 lawsuits filed by women who said Watson exposed himself, touched them or kissed them against their will. Two other lawsuits remaining pending. Two grand juries in Texas have declined to indict him on criminal charges.

On Tuesday, attorney Tony Buzbee, who represents most of the women who sued Watson, said about 10 of them plan to attend Sunday’s game at Houston’s NRG Stadium. Buzbee said the women intend to make a statement that “we matter.”

When he returns to the field this week, it will be Watson’s first regular-season game in 700 days. The three-time Pro Bowler is bound to have some rust from the long layoff, but the Browns (4-7), who have invested heavily in him, are hoping the three-time Pro Bowler can get back up to speed quickly and get them into the playoff chase.

Browns star running back Nick Chubb said Watson’s return has given the team a boost.

“We’re all excited,” Chubb said. “We’ve been waiting a long time for him to come back. But it’s the same thing. We have to go out there and work. We can’t get too distracted by anything. Keep the main thing the main thing.”