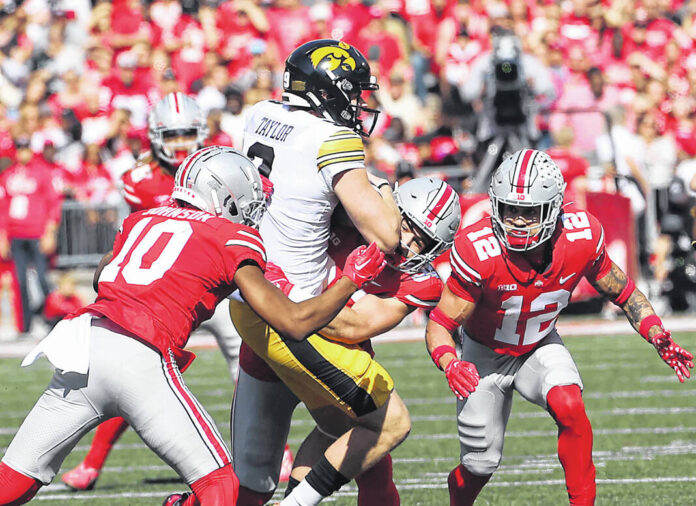 C.J. Stroud has thrown four or more touchdown passes in 12 of the 19 games he has started at Ohio State and is No. 4 in career passing yards.

Sean Clifford is in his sixth year at Penn State and in his fourth year as a starter. He has completed 61 percent of his passes for 1,445 yards and 13 touchdowns with three interceptions this season.

Ohio State’s running game was ineffective in a 54-10 win over Iowa last week when the Buckeyes were held to 66 yards rushing. TreVeyon Henderson ran for 38 yards. Miyan Williams had 19 yards and 13 of those came on one carry.

Two freshman have led Penn State’s running game. Nick Singleton, who was ranked the No. 1 running back recruit in the country last year, has rushed for 561 yards and seven touchdowns for the Nittany Lions (6-1, 3-1 Big Ten). Kaytron Allen has gained 396 yards.

Jaxon Smith-Njigba returned to OSU’s lineup after a long rehab for a leg injury and had one catch for seven yards against Iowa. Julian Fleming showed he can be a deep threat with a 79-yard touchdown catch. Marvin Harrison Jr. and Emeka Egbuka continued to be consistently outstanding.

Wide receivers Parker Washington and Mitchell Tinsley give Clifford two quality targets. Washington has 30 catches for 388 yards and one touchdown. Tinsley, a transfer from Western Kentucky, has 28 catches for 340 yards and four touchdowns. Tight end Brenton Strange has 17 catches, four of them for touchdowns.

Ohio State’s offensive line faced some questions for the first time all season after the Iowa game. Pass protection appeared to be pretty solid, with only one sack allowed. But the running game producing only 66 yards on 30 carries was unpleasantly similar to rushing for 64 yards on 30 carries against Michigan last year.

Four of the five sacks OSU got against Iowa belonged to defensive linemen. The pressure applied by the line played a big role in the six turnovers Iowa had, five of which involved Hawkeyes quarterbacks.

Ohio State played three linebackers instead of its usual two around 1/3 of the game against Iowa to counter the Hawkeyes’ heavy reliance on running the ball.

Jordan Hancock, who played for the first time all season last week, looks like he will provide some help at cornerback for OSU.

Kicker Noah Ruggles is 26 of 28 on field goals in his OSU career. Punter Jesse Mirco averages 44.9 yards per kick.